From Paris to Alice 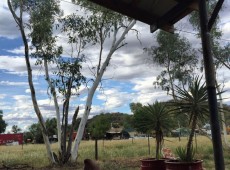 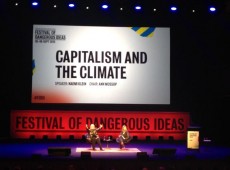 I’m back home on Arrernte country in Mparntwe (Alice Springs), Central Australia after a whirlwind, and to be honest, exhausting, six months on the road rolling out Avi Lewis’s powerful global climate change documentary This Changes Everything. I’ve been working on the This Changes Everything project – which includes Naomi Klein’s award winning book, Avi’s film and a grassroots global outreach strategy – for the past two years and much of that time was spent laying the groundwork for the launch of the film leading up to the Paris UNFCCC climate negotiations, COP21, late last year.

Here in Alice I live on a block of land known affectionately as The Island. Part tongue in cheek moniker (it’s the middle of the Australian desert) and part reference to the way the block is hugged by a low rocky mountain range and fronts a (mostly dry and sandy) river bed. The Island is a haven of recycled metal sculptures, caravans, kids on horse back or in billy-carts and home to some of my dearest friends in the world.

It’s a world away from the red carpet at TIFF with the likes of Pamela Anderson, Alfonso Cuarón and inspiring activists from the Beaver Lake Cree Nation and Montana, far from berocca fuelled 15 hour days in a Greenpoint sublet rushing to prepare all the social media for the iTunes launch of the film or checking the excel spreadsheet for our NYC IFC season premiere guest list one more time, from dinner at a Parisian brasserie with the crew from Democracy Now and Jeremy Corbyn’s team or walking past the shrines outside the Bataclan in Paris, waiting to hear if friends are okay after being struck by stun grenades shot by French police attempting to uphold the ban on protests or joining the joyfully costumed “We Can Can” protest at the Moulin Rouge…. 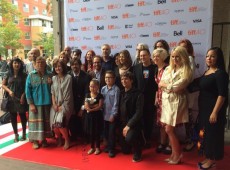 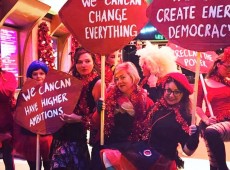 But somehow sitting on this deck that a mate built me in exchange for an old flat dodge bed truck I used to use for a cinema looking out across a paddock full of browning buffel grass at the rocky ranges, watching the neighbour’s kids careen through their yard on their home made flying fox, listening to the chatter of birds and the low hum of commodores driving up the river, this feels like just the right place to slowly process and reflect on all the pieces of my work and this movement.

At the end of the strange bubble that was Paris I collapsed with one of those colds that only hit you when you finally allow your body and mind to rest. I couldn’t think properly or read as much news as I had been, I didn’t want to engage with social media and I just wanted to soak up the warmth of an Australian summer (I’d missed summer for almost three years with my ill timed hemispheric swaps).

I spent a few weeks down south with friends, family and the beach. Then slowly as my energy came back I drove 4000kms across the country with a dear friend. We watched the ocean and forests give way to wheat fields and open plains before the red dirt of the centre lined the thin bitumen highway as the road home opened up before us.

I’m adjusting to the pace of a small town – virtually no travel time as opposed to 45 min commutes on the subway from Brooklyn to Manhattan – and the shift from anonymity to the feeling of being known and knowing. I am reflecting on so many stories and ideas and – if I am really honest – wondering how on earth we’re all going to make it as the impacts of climate change worsen. How am I going to be able to live here for the rest of my life if the impacts on the desert are any where close to as bad as they are predicted to be? 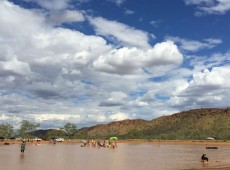 Far more than the surreal moments with high profile thinkers or at high pressure events; or the shift in travel time or the natural landscape the biggest shift from being on the road with this work to being home has been to no longer constantly be exposed to organisers and activists. My days no longer solely consist of conversations around climate, activism, justice and transformation.

Back home I am talking and hearing about ambitious arts projects, how the reticulation on the gardens held up under the recent storms, what is happening in the local campaigns and the growth and exploits of my mates kids. These very human and grounded tales I love, they bring me back to community, to a sense of being held and to being woven in to other people’s lives, and of other lives being woven in to mine.

But in my professional day-to-day life I am missing the daily connection that I’ve had with grassroots organisers, activists, climate scientists, communication strategists, filmmakers, artists and writers – all who are deeply committed to questions of transformation, justice and transition.

The week after I got home I gave a short presentation on my reflections of COP21 in Paris to the Environmental Advisory Committee of the Alice Springs council, on which I sit as a community representative. It was a challenge to speak about my work to an audience who come from a very different place to me.

And then just a few days later the NT government approved the tender for a new power station in Alice for $75M. No one can recall even a murmur about the tender process – and surprise surprise – it’s to be run on gas which the government seems to think is the next economic boon for the territory.

Observing the lack of urgency to address climate change – instead decisions that take us in the opposite direction – is a shock for me, after spending several years deeply immersed in movements working directly on climate change, renewables, justice based transitions, resistance to fossil fuel infrastructure and social change. After meeting with frontline organisers from around the world battling to hold back coal trains, tar sands, fracking developments, ports and pipelines.

Of course these backwards fossil fuel driven decisions are also being made by governments elsewhere – we are in a contested moment, as renewables gain force and fossil fuel companies are fighting to cling on to their power, trying to lock us in by building infrastructure: mines, ports, train lines and power stations. But it feels very different when you’re facing these decisions in the place you live and love. It’s the shock of leaving a wonderful bubble of globally engaged thinkers and returning to a small town in a territory that doesn’t yet value real leadership and vision for the future.

This is not cultural cringe – we have incredible organisers and mounting victories here in Australia too (AGL pulling out of NSW, the victory against the proposed Muckaty waste dump, the opposition to Carmichael mine, the growing momentum of #letthemstay, incredibly organising in Borroloola…) And here in Alice there is an incredibly wise, creative and engaged community – a reading group for This Changes Everything started last week and there are action groups on peace, refugee rights, climate, fracking and against the nearby proposed nuclear waste dump, all of which are energised and meet weekly.

What I think I am feeling is the blunt shock of widening the circle of people I am engaging with, of remembering the tough work that comes with organising in a small community in proximity to power and those who hold it. I value this widening of connections about living here in Alice, but interacting with people who are dismissive of the urgency to act and transform our systems makes me miss the lounge rooms, bars, conference halls, taxi rides, warehouse spaces and cinemas where I’ve joined thousands of other deeply engaged and committed folks who are facing the reality and dreaming up solutions.

I know this blunt reality is where the real work lies – in drawing strength from this global web of resistance and building power between our struggles – and digging deep in our local communities to fight in and for the places we love.

I know this is where I want to be and live and work alongside the inspiring, committed, creative, tenacious and visionary people in this community. I also know that I am unbelievably privileged to have had the opportunities and exposure I’ve had in these past few years and to have met and collaborated with so many incredible people. I am so deeply grateful for these adventures and experiences.

Now to start the thousand year process of knowing this place* and doing my best to be part of the much needed leap to a justice based low carbon future – with flying foxes and camp outs under the stars and whacky art – building a vision for a resilient and inclusive future in this magical place I call home. 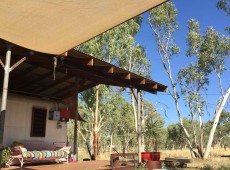 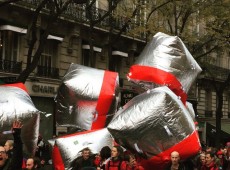 * “After listening to the great farmer-poet Wendell Berry deliver a lecture on how we each have a duty to love our “homeplace” more than any other, I asked him if he had any advice for rootless people like me and my friends, who live in our computers and always seem to be shopping from home. “Stop somewhere,” he replied. “And begin the thousand-year-long process of knowing that place.” That’s good advice on lots of levels. Because in order to win this fight of our lives, we all need a place to stand. – Naomi Klein; from Climate Change is the fight for our lives, but we can hardly bear to look”