What a bloody great adventure of a year! I built a house out of mainly recycled materials with the help of some wonderful friends and I travelled extensively connecting with activists and social movements around the world.

I’m working with wonderfully creative, gutsy, generous, rigorous and smart people and I’m lucky enough to be part of the team of the brilliant This Changes Everything project. 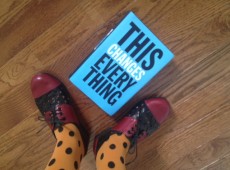 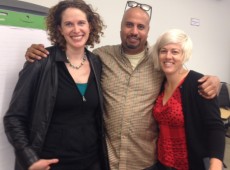 2014 has been a very affirming year. I think no matter how much I’ve tried to resist the Australian ‘cultural cringe’ and ‘tall poppy syndrome’ these are pretty pervasive cultural norms. After spending the last 11 years in the desert I felt that somehow – even though I consider the Territory to be one of the most dynamic, innovative and challenging places to work – my skills and experience didn’t match up.

However, the more I travel and the more projects I come across the more I realise how unique and important the work of Big hART and many of the projects that I know of and have worked on in Alice Springs – projects like Ngapartji Ngapartji, Akeyulerre, ALEC, Brothers & Sisters NT, Elbow Workshop, 8 Hele Cres, Starlady’s salons, 8MMM (to mention a tiny few) – truly are. This is both a relief and a reminder that the big western cities are not the most powerful places and that the world is much more complex and interesting than that.

2013 wrapped up with Queen of the Desert having screened at over 45 film festivals and Big hART presenting Namatjira in London.

I joined the team of This Changes Everything in November 2013 and went to part time in my National Producer role with Big hART.

In early 2014 I moved back to Alice properly with a mission to build a shipping container and silver bullet house on Basso Island (my block of land). I traded my old dodge truck with my mate Giles who built me the amazing deck and in August the project was complete and I moved in! 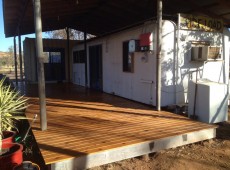 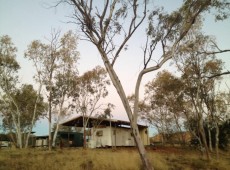 The work year kicked off with a big focus on supporting Big hART to negotiate a full range of performances and events to premiere in the October Melbourne Festival program including staging Hipbone Sticking Out and Murru and hosting a Big hART film retrospective and a Big hART process master class at ACMI.

I also rejoined the board of the critically important Arid Lands Environment Centre.

After a period of deep reflection I made the big (and emotional) decision to take extended leave from Big hART in May to focus on This Changes Everything and take up the opportunity to work with the visionary Bertha Foundation.

I’ve joined a fabulous small team of folks working to develop an activism portfolio for Bertha – watch this space!

As part of my work getting to know the existing portfolios at Bertha I attended two convenings of the brilliant Bertha Be Just program – a convening of the full network in Cape Town, South Africa in March and a convening of the project partners in Berlin, Germany in October. I also attended IDFA – International Documentary Film Festival Amsterdam – to understand more deeply the diverse and ambitious Bertha media portfolio.

My work on film & impact more broadly continued through attending the BRITDOC Impact Distribution Lab in New York in March and maintaining active involvement with a brilliant group of peers; the Impact Producers Group.

The Australian Director’s Guild invited me to give lectures and teach a two day master-class in impact producing in Perth and Melbourne in May and June. I spoke at a number of other conferences and panels through out the year on media, story, activism and change.

I was invited to do some strategy and impact consultation for the forthcoming Frackman documentary. Frackman went on to be selected for the inaugural Good Pitch Australia in November and will premiere in early 2015. I reckon it will be a powerful tool for the movements against gas extraction across Australia – and hopefully the world.

And I started talking with filmmaker Gabrielle Brady about a very exciting documentary project she is developing on asylum seekers – more on this soon.

In September after a few weeks of Basso Island bliss I took off for NYC which is where I am currently based. I landed a couple of weeks before the launch of This Changes Everything and the People’s Climate March; which was a truly brilliant event to be a part of. The moment of silence was incredible – in such a big crowd, in such a big city – and the whole day was a powerful reminder of the role of culture and ritual in the making of change. 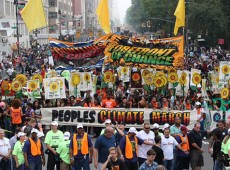 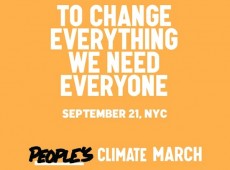 I went on to travel with Naomi to London for the UK launch of This Changes Everything in October and for the Dutch and Belgian launches in November.

In October I was stoked to take part in a retreat in the Adirondacks with the folks from the Beautiful Universe – Beautiful Trouble, Beautiful Solutions & Beautiful Rising. Aside from being bloody happy for some time under a big sky and stars I was thrilled to discuss tactics and strategies on the role of story, culture, art and networks in change making with such great thinkers and trouble makers.

Also making some deeper friendships  – more than just allies – which is a pretty essential thing when you move to the other side of the globe and leave your amazing posse in Alice! 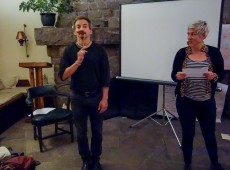 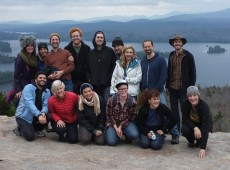 In November I was part of a four day brainstorm around the possibilities of Russell Brand’s online series The Trews with a bunch of designers, artists and techies. It was a pretty fascinating experience of rapid prototyping with a group of people who didn’t all already know each other and interesting to explore the tensions between different platforms and ideas about social change.

In the last weeks of 2014 I joined the protests in New York calling for justice for Mike Brown, Eric Garner and to #shutitdown. I’m deeply inspired by the leadership of activists from Ferguson, Black Lives Matter and across the country and am reflecting a lot on how this movement can inspire action on parallel issues of police violence and racism in Australia.

The work year wrapped up with an amazing weekend retreat for This Changes Everything with our education partners Rethinking Schools and Zinn Education Project. With 15 teachers writing lessons and responding to the book and film to think about the best ways to create materials for secondary school classroom use.

I was lucky enough to round out the year with family in Costa Rica where my sister and her husband run the beautiful rural farm and b&b; Casitas Tenorio. Did you know Costa Rica has no army and is already between 94-98% renewable energy wise? Amazing. 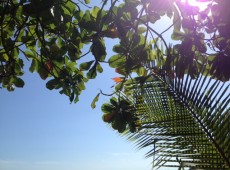 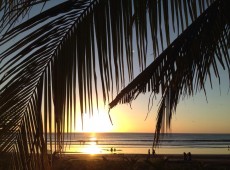 It’s been a huge year of travel and networks and politics and social movements. I am deeply inspired and feel ready for what I am sure will be an even bigger year as projects take off with Bertha and the This Changes Everything documentary is released.

As 2015 kicks off I’m thinking a lot about love and interdependence.

Our connections to each other will make us stronger and enable us to build the power to create the very necessary and urgent shifts for true and lasting justice.

With love, gratitude and in solidarity, here’s to a transformative year.

ps all pics by me except for PCM unattributed pics from internet & retreat pics from Beautiful Solutions pals.