All this thinking about impact and cultural driven social change campaigns has prompted much reflection about my experiences at Big hART. I plan to write more about a few of our projects and thought I would kick off with Ngapartji Ngapartji.

Ngapartji Ngapartji was based on Arrernte Country in Mbantua (Alice Springs), Central Australia between 2004-2010. We worked in town camps in Alice Springs including Little Sisters, Kartne and most often Abbott’s Camp as well as Pitjantjatjara communities in WA, NT and SA; most frequently in Ernabella, SA.

Like all Big hART projects it worked on many levels and involved film, dance, music, play, collaboration, travel, campaigning, community development and friendship across the arc of the project’s 6 years. This included a one year ‘entry process’ the body of the project and an 18 month ‘exit strategy’. Whilst there is often a broad project design sketched at the outset the entry process is a time of discovery, relationship, trust and partnership building where the direction of the project is honed with participants. For instance we didn’t know we would be making an online language site or a language policy campaign when we started the project. A good blog about the genesis of the language policy campaign can be found here.

Once we were underway we were at once focusing on the opportunities for the core participants – a group of 6 young people from Abbott’s Camp – and our big picture social change agenda. We were constantly managing the tension between our on-the-ground process and delivering high quality and high impact work out in the world.

We had a core team of five with some changes over the years; a creative producer (me), a community producer, a filmmaker, a language producer, an artist/language worker and a literacy worker. We worked closely with a group of elders and Pitjantjatjara language advisers, with other Big hART producers, key performer Trevor Jamieson and creative director Scott Rankin providing advice and guidance from interstate. When we toured the stage show the company would expand to 27 people and when we staged the production in Ernabella we swelled to 54 people camping for 3 weeks (with the donkeys!) on an outstation 12 kms from the community. 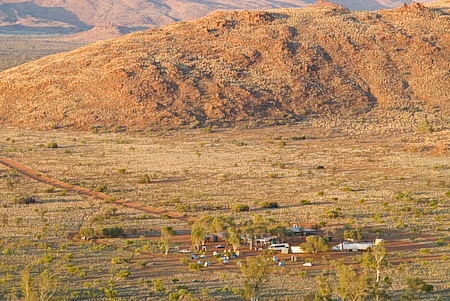 Trevor on the road to our camp at Itjinpiri Outstation, SA

All of this activity was interwoven; workshops in filmmaking built literacy training in, touring theatre shows were opportunities for local and national media profile, script work enabled language exchange and every presentation of the play was used to leverage the language policy campaign. Across all of these activities was in-depth thinking about ways to encourage identity shifts; in individuals (both project participants and workers), in local communities and in audiences. 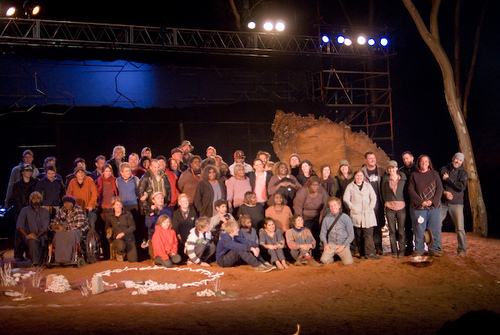 It was a remarkable, dynamic, complex and layered intercultural project.

One of the most exciting aspects of Ngapartji Ngapartji was the collaboration; across cultures, across language, across areas of expertise and the sharing of leadership across these differences. The whole was greater than the sum of the parts; it was an amazing network of people to be part of.

The theatre production explored the impact of the Cold War and the British Atomic Tests (1953-1965) on Pitjantjatjara people through prism of the remarkable actor Trevor Jamieson’s family experience in the South Australian desert.

“It’s a magical piece of theatre” – Sybil Nolan, Herald Sun
“The most important event for local audiences to see this Festival” – Andi Moore, Artszine
“It does honour to the festival that has presented it” – John Slavin, The Age
“An inclusive plea for understanding and justice” – Miriam Cosic, The Australian”

Ngapartji Ngapartji means ‘I give you something, you give me something’ and is a Pitjantjatjara concept of reciprocity and exchange. In many ways the exchange was almost invisible to people, which was fascinating. I don’t think the Pitjantjatjara members of the project realised how profound teaching their language and sharing stories was for the audiences. At the same time I don’t think audiences realised the importance of listening and of learning language to the Pitjantjatjara company. There was a benign simplicity in the act of teaching ‘Kata Alipiri Muti Tjina” (heads shoulders knees and toes) to audiences in the show, disarming people so completely and creating a beautiful moment of awkwardness and openness that set the scene for much of the broader project.

An important aspect of Ngapartji Ngapartji was to allow this exchange to take place between audiences and cast – online and in performance spaces – and to avoid Big hART being gatekeepers or intermediaries as much as possible.

The indigenous languages policy campaign built slowly alongside the community relationships and touring work. Achieving the language policy was incredibly satisfying and important. We continue to keep pressure on the government to match this policy commitment with more resources, to include indigenous language in the national curriculum and to put languages at the centre of the Close the Gap agenda. 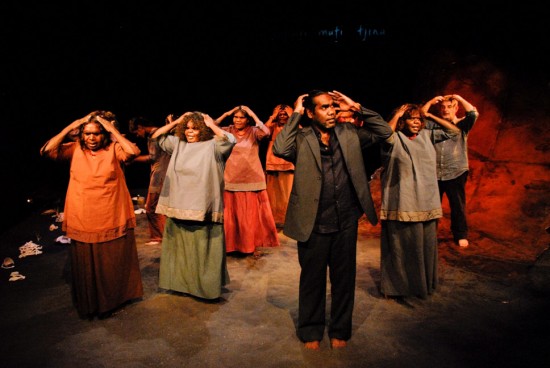 Measuring the impact of Ngapartji Ngapartji across the breadth of the project is quite a task. As I said my recent post on impact – you often ‘know’ what works but it is often harder to actually articulate it. Dr. Dave Palmer from Murdoch University wrote this fantastic evaluation ‘The Consequences of Kindness’ which looks in detail at the projects plan and outcomes.

The success of the language policy campaign is easy to identify by the launch of the policy itself in 2009.

However, the social impact at an individual level, on the choices and social trajectory of participants and the attitudes of the broader community of Alice Springs and Australia is much harder to track.

As Big hART see our work as highly collaborative and not top down we are more reluctant to claim high levels of impact on the lives of young people we work with than say a more traditional NGO or government agency might be. We are not always very comfortable claiming that our projects ‘turned people’s lives around’ or ‘saved’ them.

That said it is clear that a six year project that provides this range of opportunities, training, travel and life experiences achieves impact. I certainly observed sustained growth in many people involved in the project, myself included.

Dr. Palmer’s report concludes, ‘There is also very good evidence that young people’s involvement had a powerful impact on their levels of self confidence, pride, social identity, self discipline levels, sense of possibilities for the future and hope.’

Big hART are participating in an ARC longitudinal research study with Murdoch, QUT and Durham Universities to assess the long-term impact of our projects in the communities in which we have worked. I am looking forward to having more language and ways of speaking about that aspect of our work when the study is completed later in 2013.

It is hard to capture in a short post just how much I learned from this project and where is sits in my heart. Suffice to say that I really came to understand collaboration across difference and that small groups of people can leverage enormous change with the power of a beautifully told story.

I have so many enduring memories from bush trips, from tours, from language learning and from road trips or camp outs. It completely convinced me of the genius of the Big hART model and of the capacity for culture-lead social change to have sustained impact on individuals, communities and at a policy level.

There is a huge part of my heart full up with six years of stories, language and experiences that made up Ngapartji Ngapartji, and so so much love for everyone involved. Wiru mulapa!

The project website is archived here and has a wikipedia page here. There is a chapter in Art and Upheaval which explores the development of the project and an essay in ReAwakening Languages about the language maintenance aspects of Ngapartji Ngapartji.

You can watch the documentary Nothing Rhymes with Ngapartji here

The Ngapartji Ngapartji Memory Basket is in most state library collections, every library in the NT and the National Library in Canberra.

I’ve posted a couple of reviews of the stage production here and the documentary here. 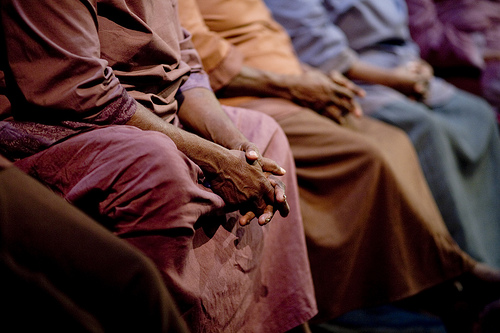