Nothing Rhymes with Ngapartji – The Age review 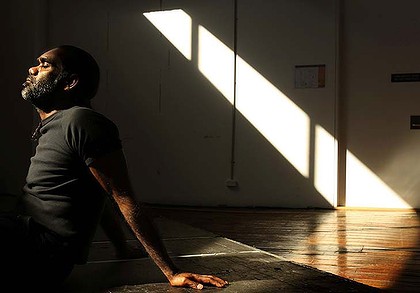 It’s a highly personal account of his family and, by extension, the Aboriginal people, but he’s never shown it to those at the centre of it all. Until now. Heading back into the bush near the remote Aboriginal community of Ernabella in South Australia, he decides to stage the work for his family and community elders.

He hopes they’ll be proud of him, that they’ll be happy their stories are being told to wider audiences, but there’s a major problem. Some of the memories incorporated into Ngapartji Ngapartji are of his father and grandparents, how they lived through the Maralinga bomb tests and what happened to them after. But Jamieson’s father is dead and, in his culture, to talk about him and show images of his face is strictly forbidden. To perform his play he must either rework everything or risk offending his elders. It’s a difficult choice and highlights the struggle of Jamieson and his people as they move forward. How much of their traditional ways should they cling to and how much should they abandon? And more importantly, will Jamieson ”cop a flogging” from the community if he decides to break the law?

A fascinating documentary, this shows the difficulty of bringing a high-tech production to a remote area, the clash of an ancient culture in the 21st century, the turmoil faced by those trying to straddle both worlds and more. The archival footage alone is incredible, reminding us just how recently the people of Jamieson’s homeland were quite happily living on land they had called home for generations before it was literally blown away