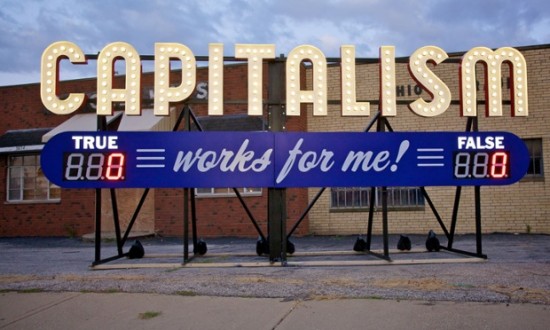 Capitalism, It works for me. By Steve Lambert

In May’s federal budget Attorney General & Minister for the Arts George Brandis announced a $104.7M cut to the independent Australia Council for the Arts and the establishment of his own National Programme for Excellence in the Arts (NPEA).

Artists have been responding loudly and creatively to the announcement, especially the critically important small to medium sector; where over 145 companies will be feeling the impact of the cuts. The #freethearts campaign is coordinating a whole-of-arts sector delegation to Canberra this Thursday, there is an online petition with over 11,000 signatures and the brilliantly cheeky Art of Brandis is going viral.

However, we won’t be successful in defending a single sector from the logic of austerity – artists need to stand up against the ideology driving these cuts, not just the cuts themselves.

Rather than simply arguing to protect funding for the arts, it is critical – to the arts sector and our society more broadly – that artists take a deeper look at the worldview held by this government that is driving these cuts and the cuts to just about every other sector in the public sphere.

This is not a moment for artists to be polite and argue for the merits of the arts alone. It is a moment that should instead inflame a critical dialogue about power, justice and the kind of Australia we want to live in.

We need our artists, poets and storytellers to be reflecting back to us a critique of the worldview of this government who seem hell bent on cutting public funding to essential services, building a super surveillance state, breaking international law in pursuit of their brutal border policing and passing massive tax subsidies on to the resource sector – with no heed for the climate crisis we face.

We need art and stories that help us understand that there are other options, other ways of seeing ourselves and each other so that we can demand a different kind of leadership alongside truly fair and just policies from our politicians.

I would love to see discussions widened to include the impacts of the secretive Trans Pacific Partnership (TPP) when arts delegates head to Canberra this Thursday. The TPP is a proposed mega free trade deal between Australia, USA and ten other countries. We know – thanks to Wikileaks leaking the draft intellectual property rights chapter – that this trade deal could see digital downloads made criminal offenses and that there are significant threats to press freedom which could severely impact on journalists and whistleblowers.

With these kind of proposed trade laws the free trade, free market ideology marches on. And under this kind of ideology there is no way we can expect to see robust or independent funding for the arts.

We also know that these free trade deals are going to have a profound impact on our ability to protect the environment, take action on climate change and build our local economies.

Let this moment not just be about defending the arts funding patch, but about taking stock of the bigger picture and bringing an understanding of neoliberalism to our defense of the arts.  And please let more artists stand in solidarity with others campaigning against policies created by the same maddening ideology – against the closures of remote indigenous communities, in defense of the Great Barrier Reef and in solidarity with asylum seekers.

We need to talk about the destructive worldview driving these policies, we need our commentators and artists to be naming what is happening, we need to understand this, we need to build solidarity between all the sectors who are feeling the pain of this slash and burn agenda and then we need to fight, together, to build something different.