In early June I took part in the Centre for Story Based Strategy‘s Advanced Practitioner Training.

I have taken to calling it ‘Activist Camp’ or ‘Activist School’ – and whilst there were S’Mores (marshmallows, chocolate and biscuits, crazy American camping cuisine!) and it was at a christian holiday camp in the Sierras complete with red woods, deer and squirrels, it had a lot more depth and rigor than me flippantly calling it ‘activist camp’ suggests.

Centre for Story Based Strategy are a communications and strategy training organisation. In their own words:

Center for Story-based Strategy (CSS) is a national movement-building organization dedicated to harnessing the power of narrative for social change.
CSS uses the power of narrative to advance a holistic vision connecting struggles for democracy, peace, justice, and ecological sanity.
We offer social justice networks, alliances and organizations the analysis, training and strategic support to change the story on the issues that matter most.
We’ve trained over 4,000 activists since 2002. Through collaboration consulting, and direct partnership we’ve supported over 200 innovative social change organizations to win critical campaigns.

I have followed the growth of Centre for Story Based Strategy (formerly known as Smart Meme) since its inception through a close friendship with one of the founders of CSS, Doyle Canning. Doyle came to Australia shortly after the Seattle protests in 1999 with a bundle of passion and a VHS tape of the ‘Battle of Seattle’ film. I was involved in Access News at the time and we screened the film at our regular Monday night event. Doyle and I became firm friends. Doyle is one of the most amazing educators and trainers that I have ever met and I was thrilled to finally be able to attend a training with the organisation she and Patrick Reinsborough have grown since 2002.

CSS have developed a methodology they call ‘Story Based Strategy’ which involves understanding the narratives, frames and stories at play around a given issue. Breaking down the dominant narratives, underlying assumptions, roles, conflicts and stories allows activists and movements to develop their messaging, stories and frames to intervene and create breaks in the dominant narratives and win the ‘Battle of the Story’ – which is critical to achieving change.

The training was rigorous and very cleverly designed. There were 40 of us from a great range of movements from unionists, to environmentalists to community organisers; including Iraq Veterans Against the War, National Immigrant Youth Alliance, Grass Roots Global Justice Alliance and many more inspiring folks. Most people had undertaken some training or engaged CSS in their campaigns before and were in communications or leadership roles within their orgs. So basically an unbelievably kick-ass crew to be hanging out with for a week! 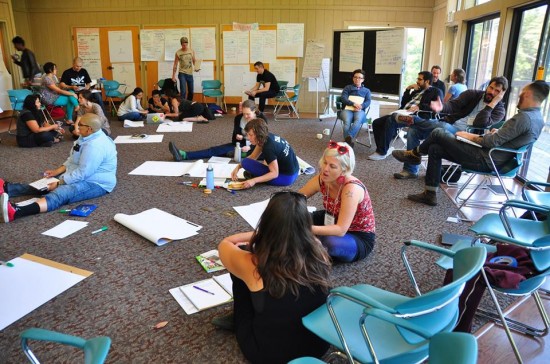 Over 5 days we were taken through a range of practical tools from the ‘Story Based Strategy’ by a fantastic group of facilitators. We practiced them in a range of campaign simulation scenarios, facilitating the tools on issues we were working on ourselves and then spent a day and a half applying them to real life campaigns which we presented to a panel of expert judges on the final day of camp. There were a range of case studies and worksheets and lots of lots of butchers paper and textas!

I gained great working knowledge of a bunch of practical tools that I look forward to applying to my own practice and am happy to share with anyone who is interested. Most of all I loved having critical discussion on the the nuts and bolts of media, story and narrative for 5 days.

I highly recommend CSS’s great book Re:Imagining Change which is now in it’s 3rd print run and is available in hard copy from PM Press.

Pru Gell of Space for Change (Syd) and Holly Hammond from Plan To Win (Melb) have also taken this training, so there are now three of us in Australia as part of the Story Based Strategy Community of Practice, which is very exciting. I would love to see CSS run some training in Australia in the future as I think their approach is invaluable to social change movements and organisers.

The comraderie and solidarity that was developed over the short but intense time we spent together was priceless and filled me up big time. I left with a strong sense of ‘we’ve got this!’; that collectively we have the smarts, reach, passion and commitment to make profound impact on a broad range of issues. I left with a very full heart.

Big thanks to all the awesome trainers and CSS staff, to all the other participants and especially huge respect to Patrick and Doyle for the hard yards you’ve done to establish such a critical organisation and practice. Can’t wait to see what you do over the next 10 years! 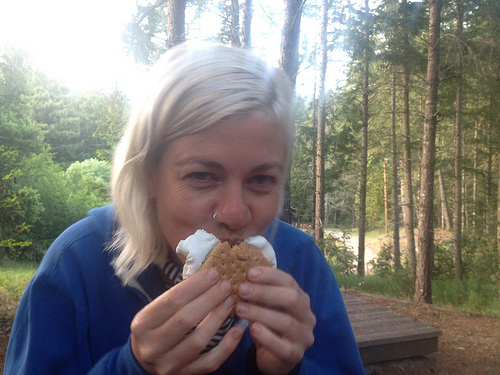 My first ever S’more, CSS Training 2013. Pic by the fabulous Bernice Shaw.