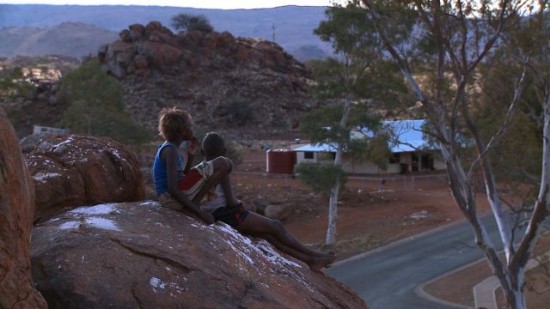 The invitation was irresistible: to move to central Australia to edit a complex and powerful documentary. I gave this doco my all, and it gave me much more in return.

Editing Nothing Rhymes with Ngapartji called upon everything I’d ever learned about storytelling, challenged my assumptions, and showed me a whole new side to the country I grew up in. There are many layers to this tale, from the tragic story of the Maralinga atomic tests, to indigenous language loss, traditional law, and an epic road trip to name a few.

The documentary follows the tour of the hit theatre show Ngapartji Ngapartji to Ernabella, a remote indigenous community in South Australia. The show had sell-out seasons at all the major performing arts festivals in Australia, with standing ovations at every performance, but this was the first time it was to be performed on country, in the community where the project was developed.

The show’s lead performer, Trevor Jamieson, tells the story of his family, who were moved off their traditional lands to make way for British atomic testing in the South Australian desert in the 1950s and 60s. And performers from Ernabella tell of their own memories of the ‘sticky cloud’ that passed over their community, located directly to the north of Maralinga.

Ngapartji Ngapartji translates as “I give you something, you give me something”, a guiding principle of the Pitjantjatjara people. And the play itself exercises this spirit of exchange. Performed in equal parts English and Pitjantjatjara, the play weaves together the tragic central storyline with language lessons delivered with generosity and good humour, and a stirring choir who leap across cultural and genre divides.

Alex Kelly, who produced the play and the documentary, says, “We wanted to tour the main stage version of the play to Ernabella. That meant trucking out a full-scale set, lighting and sound rig and crew, on mostly dirt roads; and building an open-air theatre in a dry riverbed in the middle of town.”

The crew camped at an outstation 11km outside town, with someone staying behind each night to sleep on set, to guard against curious camp dogs and donkeys.

In taking the show to Ernabella, Trevor took enormous personal risks: performing in Pitjantjatara for people who spoke the language more fluently than he did, and challenging traditional law by telling the story of the atomic tests and their enduring impact on his people. Trevor also had to decide whether to risk breaking law by mentioning the name of his father, a central character in the play, who passed away only weeks before the tour.

Without a doubt, the biggest challenge of the documentary was to weave together so many complex layers.

Director Suzy Bates and I spent countless hours in self-imposed ‘lock-up’ in our besser block edit suite, logging and analysing, cutting and shifting; using pen, paper, sticky tape, computers and index cards to nut out the structure. Oh, and there was quite a bit of chocolate involved too!

It was a challenge to the very end, figuring out how to convey complex information with a lightness of touch demanded by the duration we were working to, and a strong desire on both our parts not to overstate or over-explain. To use the power of juxtaposition, and small glimpses that hint at a greater whole, and let the audience connect the dots.

In the play, writer-director Scott Rankin elicits intense emotion by deftly transporting the audience to a different time, place and point of view. Trevor Jamieson has an uncanny ability ‘turn on a dime’, conjuring characters, and dramatically shifting the tone of performance, all with impeccable grace and wit. We had to try to achieve this same richness and dexterity. But instead of using the tools of stagecraft, we were working with the tools of the documentary maker.

The challenge was to wrestle so many parts into a coherent whole. And, like the play, we needed the documentary to be much, much more than the sum of its parts.

When you earn a living as an editor, you get used to having words and phrases stick in your head – drummed into you by repetition, and often revisiting you out of the blue years afterwards. From this documentary, one of the lines of the play still rings out to me:

There’s nothing out there in Spinifex Country

Just flora and fauna, at the world’s end.”

I grew up in the ‘burbs, drowning in a sea of red-brick. But after being deeply absorbed in the documentary for months, visiting Ernabella twice, living in Alice Springs, and spending any spare minute I could soaking up the surrounding landscape, the strangeness of red-brick really struck me. For me, this was the most palpable image of the parallel worlds we inhabit in Australia. An ancient culture coexisting with 1950s suburban monoculture and cold war paranoia, like the contrasting layers in our geology.

The play was created for a mostly non-indigenous audience, but grew out of a long-term project working with indigenous communities across central Australia. Similarly, our documentary had to walk in both worlds. We consulted with our commissioning editor in ABC in Sydney, and the elders in Ernabella, and tested our cuts on people who had an intimate understanding of Aboriginal culture, and on friends and family who knew little. We had to consider these very different audiences, each with vastly different backgrounds, and different expectations of the film.

I think we got there in the end.

Nothing Rhymes With Ngapartji screens on ABC-1 on Sunday 3rd July at 3pm, and ABC-2 on Sunday 10th July at 8:50pm. Or catch it at abc.net.au/iview.