While bush workshops, ‘memory basket’ production, planning for attendance at another youth learning workshop in Darwin in September, ongoing documentary work and Nyuntu Ngali creative development all tick along here at Ngapartji Ngapartji, the focus of this news posting will be on an issue that sits squarely behind all of these activities – raising public awareness of the status and significance of indigenous languages, of their rapid loss, and of the pressing need to create policy and strategies to promote, preserve, and maintain indigenous languages, as well as ensure they have a respected and valued place in Australian society and life.

As discussed briefly in the previous posting (June), a big part of the ongoing work done here at Ngapartji Ngapartji has been using the high profile created by project arts activity, such as the theatre show, as leverage to push for social change, in this case to lobby for a National Indigenous Language policy. The last month has seen some significant and exciting developments in this area, including Alex taking an incredible collection of over forty letters in support of such a policy to Minister Macklin in Canberra, and consequently receiving word of a commitment to develop an indigenous languages action plan.

Alex recently shared the background of these developments with us at Ngapartji Ngapartji, as well as detailing where all this sits in both the project’s and Big hART’s commitment to social change. It was a fascinating session and worth sharing some of the details…

While much of the projects activity on the ground has been concerned with arts or media activity with Pitjantjatjara people of central and south Australia, indigenous language has always been a significant part of these activities, through the website, the theatre production, youth learning and literacy activity, and film, media and music workshops with young people. Underpinning all these activities has been the Big hART commitment to using project arts activity to create public awareness around issues faced by the target communities, and in doing so instigate positive changes in identity and behavior, and in broader community and public attitudes to marginalized communities. This is based on the idea that ‘nations are narrations’ and that through community arts projects, Big hART can facilitate marginalized communities to change or ‘retell’ dominant negative or disempowering narrations, to create stories that truly reflect the values, qualities and experiences of participants. As the Big hART project booklet says ‘It’s harder to hurt someone if you know their story’.

While there are many models and theories advocated for achieving social change, there is no evidence of a single prescribed road to take. From Alex’s description of the Ngapartji Ngapartji project’s multi-faceted language campaign, it is clear that rather than a top down approach (through policy, law or government change) or bottom up approach (from action by the people and communities directly affected), this campaign has employed a ‘kata, alipiri,muti, tjina’ (head, shoulders, knees and toes) style attack which has involved not only top down and bottom up, but nudging, poking, tapping, schmoozing, pestering, informing, questioning, discussing, moving, and entertaining, at multiple levels of the public domain, including media, academic, political, and general public forums in both local and national communities.

From Alex’s description, building such a campaign has faced many challenges. This has included employing a difficult mix of tenacity and sensitivity to counter and meet the prevailing values, misconceptions and ignorance around indigenous language issues. While there are of course many exceptions, widespread values this campaign continually encounters through politicians, the media, academics and the general public, suggest that as a nation, Australia doesn’t value languages other than the dominant English; doesn’t understand what is embedded within other languages (culture, history, and meaning that is not simply translatable); views indigenous peoples, language and culture, as ‘simple’ or ‘primitive’; and has a limited understanding of indigenous languages, ie. how many there were, how many have been lost, and how many, and where they are still spoken. (I recently asked my 16 year old niece who attends a private school in Melbourne how many indigenous languages she thought there were in Australia. She answered ‘two’. My own daughter, brought up in Alice Springs, answered ‘twenty-five’. Both fall well short ofthe actual two hundred plus correct answer.)

Part of challenging and changing public perceptions has also been the tricky process of identifying who and what sectors of the nebulous ‘public domain’ to target, and how most effectively to do this in each case. Against this background, Ngapartji Ngapartji staff, particularly Sydney-based Melanie Gillbank and Alice Springs-based Alex Kelly, have conducted extensive research around indigenous languages, about both their existing status, and any existing relevant policies, or the lack there-of. The task has also been to link the importance of indigenous languages to service delivery, consultation and effective strategies to address other challenging issues faced by indigenous people, such as health, education, employment and community capacity building, yet without becoming entangled in the complex and controversial issues of each of these separate areas. Intensive research has also been required to understand how things work in Canberra, and how to fit all this groundwork into the complex processes and procedures in operation at the federal political level.

As well as targeting ‘the opposition’, Mel and Alex have also attended language conferences and meetings all over Australia, and over the years made at least half a dozen presentations about the project’s links and commitment to language issues in forums also committed to supporting indigenous languages and halting their rapid loss. Over time, this has gained the trust of many others (linguists, academics, activists, teachers, first language speakers, community language teachers, and indigenous community members) who have been working tirelessly, but often individually, to promote, preserve and maintain indigenous languages. This work has contributed to the building up of a strong network and coalition sharing a similar aim – that is to push for a National Indigenous Language policy. The breadth of this support and coalition building was reflected in the incredible amount of letters sent to the project from many different sources, organizations and individuals, both indigenous and non-indigenous, from all over Australia in support of action around indigenous languages.

Alex copied, collated and bound these letters to form an impressive and powerful document that she was able to present to Minister Macklin, and the advisors to Ministers’ Peter Garret, Julia Gillard and Kevin Rudd, in the meeting in Canberra on June 23rd. This meeting was also attended by long-term passionate language advocates Kevin Lowe, Eastern States Indigenous Languages Working Group and Inspector for Aboriginal Education at the Board of Studies NSW, and Faith Baisden, who is on the Queensland Indigenous Language Advisory Committee and works for The State Library of Queensland’s Indigenous Languages Project.

According to Alex: ‘it was a very quick meeting – 25 minutes seemed to flash past. It was fantastic to have advisers from four offices, including the PM and Deputy PM there as well as an executive staff member from DEWHA (The Department of Environment, Water, Heritage, and the Arts) which is Garrett’s dept and where the language program sits…The meeting felt very much as if Macklin was onside and supportive and the conclusion was that she would talk with Garrett and Gillard when they are back in Australia about making a joint statement regarding commitment to developing a policy!!’ 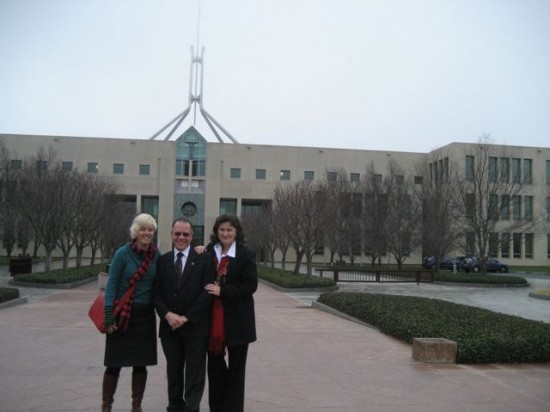 Only days after this meeting, Alex received word that DEWHA has commenced drafting an Indigenous Languages Action Plan and will coordinate this process through relevant Government agencies before consulting with key indigenous stakeholders. Obviously this is only the start of a long process but it demonstrates a commitment to the issues around indigenous languages being taken seriously at a federal level.

To sum up, the fight to recognize and support indigenous languages has been a long and complex road, one that started long before the Ngapartji Ngapartji project began, and one that will continue long after. But it is heartening to see some tangible interest and developments around action in this area at a federal level, so thank you to all of you for all the unseen and unacknowledged work in this area (especially Alex and Mel), and to all those who have contributed in big or small ways to this campaign, both recently, and in the long history of those who have fought to have indigenous languages recognized and valued.

PS: If you want to get involved with the campaign or want more info about the meeting in Canberra feel free to contact Alex on alex@ngaparjti.org or at the Ngapartji Ngapartji office on 08 89535463.

PDF file of letters delivered at the Canberra meeting:

AIATSIS paper on bilingual education policy in the NT: