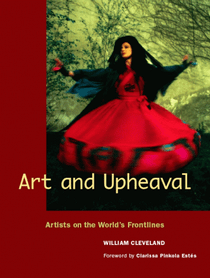 Art and Upheaval by William Cleveland features a chapter on Big hART and the Ngapartji Ngapartji project with interviews with Scott Rankin, Trevor Jamieson and I.

Art can be a powerful agent of personal, institutional and community change. The stories in this book have valuable implications for artists, academics, educators, human service providers, philanthropists, and community leaders throughout the world. The artists documented in the book have generated new technologies for advocacy, organizing, peacemaking, healing trauma and the rebuilding of community. Creativity is our most powerful capacity, and it can mitigate and heal our most destructive tendencies.

Beth Sometimes and I had a chapter published in the book Re-awakening languages: theory and practice in the revitalisation of Australia’s Indigenous languages. We wrote about “Ngapartji Ngapartji; Indigenous Languages in the Arts”.

The Indigenous languages of Australia have been undergoing a renaissance over recent decades. Many languages that had long ceased to be heard in public and consequently deemed ‘dead’ or ‘extinct’, have begun to emerge.

Geographically and linguistically isolated, revitalisers of Indigenous Australian languages have often struggled to find guidance for their circumstances, unaware of the others walking a similar path. In this context Re-awakening languages seeks to provide the first comprehensive snapshot of the actions and aspirations of Indigenous people and their supporters for the revitalisation of Australian languages in the twenty-first century.

The contributions to this volume describe the satisfactions and tensions of this ongoing struggle. They also draw attention to the need for effective planning and strong advocacy at the highest political and administrative levels, if language revitalisation in Australia is to be successful and people’s efforts are to have longevity.

The book can be ordered through University of Sydney here and chapter prelims can be viewed here (PDF).

A few days back on a Festival blog entry I waxed lyrical over the rich treasure of the Kev Carmody tribute concert. There I mentioned how some of us were ready to cast aside our White Supremicist arrogance, sit down at the feet of Aboriginal Elders and listen to whatever it was they saw fit to tell us.

How could I know that the Carmody concert was but a warm up for Big hArt’s enthralling drama -  Ngapartji Ngapartji – about the life of the Central Desert’s Spinifex people and, in particular, the joys and sufferings of lead storyteller, Trevor Jamieson and his immediate family. Do the gods really ever listen? Maybe totems do. For here I was, a few days later, not just in the presence of a truly major work of art – brimming with ideas and emotions, and exquisitely realized – but in the form of the very ‘sit down and listen’ I had asked for.

In a style that bounces joy and sometimes even reckless laughter off the cold walls or wisdom, grief and sadness (found also in the film Ten Canoes to those who saw it), I was among the second-night Festival audience who, first up, learned how to sing the kindergarten song ‘Heads Shoulders Knees and Toes’ in Pitjanjatjara: ‘Kata alpiri muti tjina’. A great ice-breaker. All of us being little kids again. The child in us brought to the surface, we were sat down again and so the lesson began.

Much recent Aboriginal expression deploying western theatre forms has been reminiscent of grief counselling: where the victim initially unleashes the horror of the experiences that is holding their healing back. The story has almost always been personal and, however compelling and sometimes hilarious, we whitefellas cannot help but come away ‘shamed’. I’m thinking of works including the plays of Jack Davis about the 200-year-old ‘White Problem’ in West Australia to the solo shows of Ningali Lawson and Leah Purcell, Seven Stages of Grieving, and many more.

Ngapartji’s writer and director, Scott Rankin, worked with Purcell on her excellent one-person show, Box the Pony, which premiered at the Festival of Dreaming in Sydney in 1997. A decade later he is one among a vast tribe of artists, volunteers, language teachers, activists, web specialists, and others, known as Big hArt – who have brought the elusive dream of ‘community art’ practice to a level artistic sophistication that rivals Vivaldi’s The Four Seasons.

Big hArt’s Ngapartji Ngapartji project centres on the concern for lost language, the glue that holds any culture together. Australia has already lost half of its 300 indigenous languages; and 110 of the 145 surviving are on the critically endangered list.

You could say the current production at Belvoir Street (where, for a Sydney season, this show belongs) is the above-surface component of the Big hArt Ngapartji Ngapartji iceberg; the bulk of the cultural activity taking place beneath this surface. Perhaps it’s better to imagine Uluru as the tip of a mountain rising bluntly out of its shimmering Central Desert surrounds, with the bulk of its meaning, history and purpose lying beneath the surrounding red-earth surface.

Nearby Alice Springs serves as the centre for Big hArt. As the program notes, this location on Arrente country is along way from  the Jamieson family’s Spinifex nation to the south west. But much of this land is uninhabitable, even unapproachable, due to the poison that lies in the soil since atom-bomb testing which took place, most infamously at Maralinga.

But Big hArt has worked on projects across the length and breadth of Australia, including sites in Tasmania, the troubled Sydney beach community of Cronulla; and even Northcott – the daunting Housing Commission estate that raps its loving and sometimes troubled arms around the Belvoir Street Theatre.

In development is Gold a Murray-Darling basin project which is looking at the effect of water (or lack of it) on communities from the Queensland border and along the course of the river system down into South Australia. It is Big hArt’s first foray into the matter of global warming. And in typical fashion it is coordinating opportunities for those effected to share their stories, and by whatever means appear appropriate, art-making will emerge.

In yet another most fortuitous merging of opportunities, Big hArt’s National Creative Director and Cofounder, Scott Rankin, was invited to give the 2008 Rex Cramphorn Lecture, included for the first time in a Sydney Festival program and delivered yesterday. Rankin offered an extraordinarily insightful commentary – again, like all Big hArt’s work I’ve now seen, swinging artlessly from sombre fact-telling to self-deprecating joke-telling, taking in both big-picture vision and microscopic and respectful observance.

Ngapartji Ngapartji is the perfect example. The production’s central performer, Trevor Jamieson, explains that he began on this project because he wanted to make a film about one of his brothers, Jangala, who – like so many dispossessed – was having trouble holding his life together. There is some stunning footage of this film where family, including Jangala’s own children, gather round after his release from jail to discuss, quite animatedly, where he might go from here.

This story of one young man’s troubles is used to personalize the big version of the Spinifex people who were driven from their land after the Australia agreed to Britain’s request to use nearby country to test atom bombs. We are all aware, to varying degrees, the impact this had on those who were poisoned. While physical illness in terms of cancer is widespread, so was the dispersion of community and consequently language. To quote Cape York elder, Roger Hart, “When I speak language, it makes me feel home”. And Rita Mae Brown: “Language is the roadmap to culture. It tells you where people are coming from and where they are going.” So this is the story of profound loss.

And it helps explain why, if you dip into the Big hArt website, you can find out how to enroll in Pitjanjatjara, the language of the Spinifex people. This company is not just out to point the finger of blame, it is rolling up its sleeves and getting into the business of helping with the healing. On the matter of radiation poisoning, the cast includes Japanese-born Yumi Umiumare, who contributes her own people’s version of this catastrophe; and we are reminded too that Australian scientists stole the bones of hundreds of infants for years, both black and white, to test for the effect of pre-natal radiation poisoning. So white people have also been abused.

Drawing on the malleable language of western theatre practice, this production takes the previous work (above mentioned) of Davis, Lawson and Purcell, et al, a step further. Here we go beyond identifying the crisis and releasing some of the pain, to a new phase of learning and healing – the beginning of. That we start with rehearsing the most simple kindergarten song is fun, but no joke. Most of us really do have to go right ‘back to the very beginning’ to make our start. In a stark reminder touched on during the production: we all know how to go to France and say ‘bonjour’ to the locals. But how many of us can do the same in even one of Australia’s 150 surviving traditional tongues? As Rankin reworked this alarming fact into his lecture: John Howard sent in the army to help but, after jumping off the trucks, not a single soldier knew how to say ‘hi’ in the vernacular of the people they had supposedly turned up to help.

By familiar western theatre standards, Ngapartji Ngapartji is a profound and moving drama, exquisitely told. Trevor Jamieson carries the weight of the production with such a gift for movement and story-telling that you imagine he is carrying around a feather. He share’s the stage with a fine supporting cast including artists and artisans, Australians of other blood-lines, and half-a-dozen women elders. Their presence proffers, in equal share again, both laughter and gravitas.

Already eight years in the making, Njapartji Ngapartji is, at its core, the unfolding of one family’s story. Without giving too much away, now is an amazing time to catch where this family story is at. Let me just say this: I called my response to the Kev Carmody concert: ‘Art Can Save Lives’. Ngapartji Ngapartji is living proof.

To hear the David Byrne/Talking Heads anthem, ‘Once in a Lifetime’ wash over you in Pitjanjatjara is a once-in-a-life-time experience. So is this show: the bold little foal I mentioned last week is now bolting around the paddock. Go take a look. Such beauty can make you weep!